Vitamin D3 supplementation in the fight against COVID-19

Vitamin D3 supplementation in the fight against COVID-19 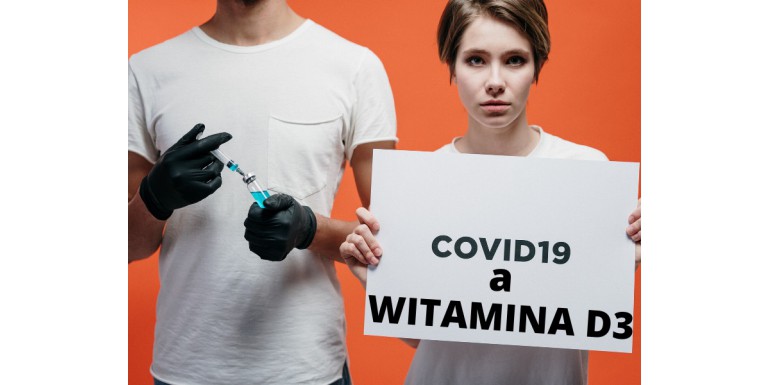 The year 2020 brought with it an unexpected situation that all of us are now facing. The global COVID-19 pandemic has unexpectedly changed the whole world around us, facing new challenges. The epidemic, which began in Central China, is becoming increasingly widespread in the city of Wuhan, easily crossing the borders of other States and continents. According to data provided by the World Health Organization (WHO), around 187 265 thousand people are infected worldwide, and about 126 thousand people have died as a result of illness (as of mid-April 2020). Statistically, around 4.48 percent of the world population has died of infection, and these figures look even worse in the European Union, where around 6.8 percent of the population has died.

What is COVID-19 really?

From English, Coronavirus Disease 2019 is an acute respiratory infection caused by SARS-CoV-2 infection. It is transmitted by droplet, usually as a result of coughing, sneezing or by touching the infected surface and then transferring the virus to the face (by touching the mouth, nose, eyes), which at the same time makes it easily spread at such an alarming rate. Common symptoms of the disease include fever, dry cough, fatigue and shallow breathing. The course of this disease can be very diverse. In most cases, the disease has a mild course, and patients have a good prognosis for beating the virus, it also often happens that patients pass it asymptomatically, however, as the statistics presented above do not always mean it. In more difficult cases pneumonia or multi-organ failure may occur. At a critical stage, pneumonia, acute respiratory distress syndrome, sepsis and septic shock, and death may occur.

In mild cases, the symptoms disappear after about 2 weeks, in the acute form of the disease the cure period is from 3 to 6 weeks, and in critical cases which ended in death - the time from the onset of symptoms to the death of the patient was on average from 2 to 8 weeks.

The most common hatching period is from 1 to 14 days, with an average length of 5 days, and just as importantly, sick people can infect 24-48 hours before the onset of disease symptoms.

The standard method for diagnosing COVID-19 is a test that can be performed on the basis of a nasopharyngeal swab. This method is convenient because the results are available within a few days, sometimes even a few hours after the test. It is also possible to perform a diagnostic test from a blood sample, which, however, requires two blood samples to be taken two weeks apart. The third available method of diagnosis of infection is the testing of serum antibodies. However, this method is inconvenient because it gives false positive results, even if the virus is no longer present in the body.

So how do you protect yourself against a virus?

The basic methods of preventing infection include frequent and thorough hand washing, keeping physical distance from people with flu-like symptoms, and avoiding touching the face with unwashed hands. It is recommended to cover the mouth and nose when coughing with a handkerchief or bending the elbow. At present, it is also generally recommended to wear masks.

The epidemic that the world is struggling with is a huge challenge not only for the general population or global economies, but the biggest challenge now is healthcare. On the one hand, doctors, nurses and other medical staff around the world are working out of breath to help an ever-increasing number of patients. On the other hand, with full understanding and recognition for the work of medics, everyone is aware that their actions, although so priceless at present, are only of an ad-hoc nature. Therefore, work is continuing on the invention of the vaccine. In March 2020, Toronto scientists isolated the SARS-CoV-2 coronavirus, an important step in drug and vaccine development. Unfortunately, work on an effective drug may still take time, which is why it is not surprising that many other studies on substances are carried out simultaneously with the vaccine, which may prove helpful in the fight against COVID-19. One of these studies concerns vitamin D3 and the impact of its deficiency in the body in the context of COVID-19 disease.

Although in most cases COVID-19 is quite mild or asymptomatic, there is a significant group of patients for whom this disease is severe, often requiring hospital stay, also in intensive care units. The reasons for the differences in the course of the disease are currently not fully understood.

Studies in the United States show that vitamin D deficiency can significantly affect the severe course of COVID-19. In addition, researchers found that vitamin D deficiency is strongly associated with health problems that increase the risk of death in these patients, e.g., blood clotting disorders and reduced immunity. Research is based on the belief that enhanced immunity effectively helps in the fight against SARS-CoV-2 virus. Based on this assumption, researchers at the Medical University of New Orleans (USA) conducted a series of studies designed to demonstrate the relationship between the course of COVID-19 disease and different levels of immunity depending on the patient group being studied, in particular focusing on vitamin D3 deficiencies among the subjects patients.

For example, scientists have observed that in the US state of Louisiana, as many as 70 percent of deaths from SARS-CoV-2 disease were reported among African Americans, although they account for only 32 percent of the population of the state. As is well known, due to dark skin pigmentation, vitamin D deficiency is common in this group of US residents. Vitamin D deficiency affects 80-90 percent of the African American population and only slightly more than 41 percent of the general population. In Boston, on the other hand, all residents of the homeless shelter (147 people) underwent COVID-19 asymptomatically. Homeless people are in worse health and are less well fed, but due to frequent stay outside and exposure to the sun's rays, which are responsible for the production of vitamin D in the skin, they may have a higher level of this compound in the body.

As a result of this observation, further studies were carried out. The study looked at patients' medical data from March 27 to April 21, 2020, and identified a group of 20 people for whom data on vitamin D levels (or, more precisely, its active metabolite 25-hydroxycholcalcalciferol) were available. Vitamin D deficiencies were found at levels below 30 nanograms per milliliter.

Of the examined group, 65 percent required stay in the intensive care unit. According to the researchers, nearly 85 percent of these patients had vitamin D deficiency, while among COVID-19 patients not requiring an ICU stay, this percentage was 57 percent. Deficiency of this vitamin was found in all patients under the age of 75, of which nearly 65 percent had critically low levels of vitamin D, i.e. below 20 nanograms per milliliter. In the intensive care group, coagulation disorders were frequent, and more than 92 percent had significantly reduced activity of the immune system (based on a significantly reduced blood lymphocyte count).

The assumption made by American scientists, confirmed by the abovementioned studies, seems to be all the more true, since currently known risk factors for severe COVID-19 include: hypertension, obesity, diabetes, male sex, advanced age, blood coagulation disorders, reduced immunity - both congenital and acquired. And they are all closely related to vitamin D deficiency.

The authors of the study themselves recognize that they were carried out on a small group of patients with COVID-19, but it is difficult to ignore the fact that the results of the study suggest a strong relationship between vitamin D deficiency and the severe course of the disease caused by the SARS-CoV-2 virus.

Therefore, researchers point to the need for more extensive research into the occurrence of vitamin D deficiency in patients with COVID-19. In their research results, they unambiguously suggest that vitamin D deficiency may affect the more severe COVID-19 course, primarily because it leads to disorders of the immune system and increases the risk of blood clotting disorders. This thesis also seems to be confirmed by earlier studies conducted in March 2015, which showed that vitamin D deficiency by nearly 60 percent increases the risk of acute viral infection. In turn, coagulation disorders are very common in patients with severe COVID-19. This is clearly demonstrated by statistics from the city of Wuhan in China, where coagulation disorders occurred in more than 71 percent of people who died of SARS-CoV-2 infection and in about 0.6 percent of those who survived the infection.

Researchers also referred to previous experiments in which supplementation with vitamin D did not bring the expected beneficial effects in the prevention of influenza, stating that in the case of COVID-19 these results may be different due to the fact that COVID-19 they are more often accompanied by blood coagulation disorders.

All this indicates that proper supplementation with vitamin D3 can have a significant impact on how we will undergo COVID-19. Due to the latitude in which we live, we are naturally predisposed to vitamin D deficiencies in our body, and in addition, proper supplementation may allow us to prepare for the second wave of the epidemic forecast for this autumn.

It is widely known that prevention is better than cure and no one needs convincing that proper care of your immunity is the best way to protect your body, so take care of your diet and proper supplementation and be healthy!