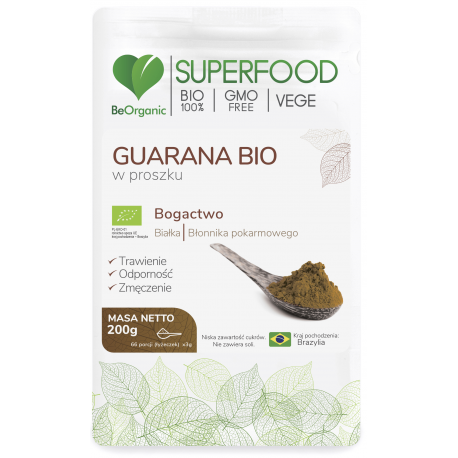 BeOrganic Guarana BIO is perfect as a means of improving immunity, eliminating headache and migraine, and allows you to lose weight. In the latter case, the caffeine contained in it plays a huge role, which accelerates the processes of fat burning in the body.

Paulinia cupana is also known as thorny, guarana or osmata. It occurs throughout the Amazon basin. It's called guarana, it comes from a drink made from its seeds by the Guarani stain. It is a species with the highest caffeine synthesis ability known so far among plants. The properties of the plant have long been known to the indigenous peoples of Amazon, who take it in various forms to increase physical and mental fitness in states of increased effort.

Mix 1 teaspoon (3g) of the product with 200 ml of water, juice, yogurt or add salads, cocktails, desserts as an ingredient.

Suggested daily portion for consumption during the day 1-2 spoon

The product is recommended for people focused on a healthy lifestyle, physically active, fitness supporters, athletes.

A balanced diet and healthy lifestyle are the basis for the proper functioning of the body.